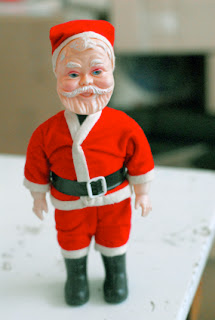 I was going to create a fancy festive photo for this post, but I've misplaced my camera charger, so this pic of santa will have to do. He's from my Nana's collection of Christmas ornaments and has sat under her tree ever since I was little, so it was only fair that I rescued it from her house before the op shop was called in. She's now living in a nursing home, so there's only so much from one house you can squeeze into a single room. Phew this post could get a little depressing if I let it... so instead it's one more sleep peoples. This year is lots of fun as Arthur now knows who Santa is and the fact that he's putting his dummies (retainers - for any American folk out there) on a plate for Santa to exchange into presents.We asked Arthur if he wanted one big present or lots of little presents from Santa, his response lots of big presents....how do they know? He's not even three yet.
So a happy and safe Christmas to all and may you eat lots, rub your belly and snooze afterwards. (Without feeling ill).
Posted by Arthur's Circus at Monday, December 24, 2007

merry christmas right back at you xx

and to you as well. Have a lovely day.