cleaning under the stairs 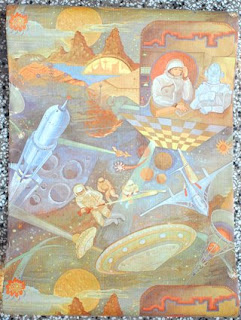 Okay, as I have previously mentioned we are cleaning out the back half of our shop, to make the shop itself bigger. It's like a giant jigsaw puzzle, but trying to put the middle in before the edge pieces. I have a plan press and decided that before it moved under the stairs it needed a cleanout. I knew it had 3 good drawers of shop-related stuff and the other 3 drawers of phooey.
Having studied visual merchandising in the early nineties (pre computer graphic programs at tafe) I unearthed many an embarassing project, posters from my bedrooms past- happy mondays, stone roses etc and paper, paper, paper. Kept from 15 years ago and never used. So yay, I've cleaned it out. And thought I'd share one of the treasures it holds. Vintage cosmonaut wallpaper.
Posted by Arthur's Circus at Saturday, April 26, 2008 3 comments:

how ace are these? 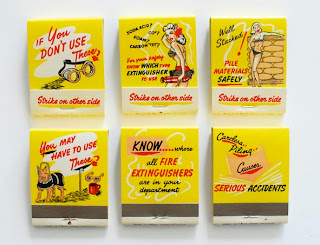 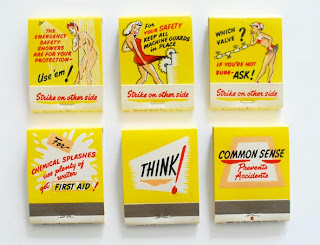 Very I say....Super mint condition and very cool graphics. I think I'm going to frame them.... I have a few sets, so they may be for sale in the near future.
I'm currently re-arranging under our stairs and am at a loss with what to do with some things. For example: folders and folders of photography negs/stuff from uni.....a mink stole that was my Nana's. I eat meat, but I can't do fur. That and where do you go out to ever wear a mink stole? Old camera gear from friend's parents that was used in the 60's/70's. Super eight camera, 16mm projectors. The list goes on.... It could soon be time for Arthur's Garage sale, me thinks.
Thankyou to fellow bloggers and friends/family for their kind words over the last few days. We're still getting used to being a one dog household, and my it's so quiet. The two hounds used to annoy me in the middle of the night, coming going.....and now oh how I miss (but also not) the barking and carrying on of old puppy v young puppy.
Posted by Arthur's Circus at Thursday, April 24, 2008 No comments: 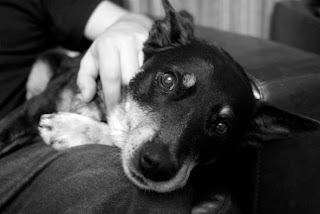 We're a bit sad here at Arthur's Circus, as our beloved Sophie passed away yesterday. So this isn't the introduction I was hoping for re: Saturdays post. Nick has had Soph since she was crazy puppy. And as anyone who has any type of heeler / kelpie x, will know they have a lot of energy to burn. Nick would take Sophie everywhere with him (often to the point of other people's annoyance), but they were both so incredibly loyal to each other. Growing up on the streets of Fitzroy (innercity Melbourne), she was a cheeky dog who often escaped on Saturday and Sunday mornings to sniff out discarded bits of pizza and souvlaki from the punters of nearby bars/pubs after closing on Brunswick and Smith Street.
Nick would often receive phone calls telling him of a sighting and off he would go to get her. One early evening we had been out and Nick received a call from the Copa Cabana (A Spanish nightclub - with salsa lessons, shows and dinner then nightclub). Sophie had wandered in there, through the mirrored entrance hall, cut across the dance floor, through the tables and found her way into the kitchen. Such a cheeky puppy. No one ever believed she was as old as she was, and she was that cheeky puppy until the end.
So apologies to anyone yesterday who came to the shop and found our doors closed. And also if this is your first time here at this blog, take a peek at some previous posts, they're alot more colourful and fun.
Posted by Arthur's Circus at Monday, April 21, 2008 6 comments: 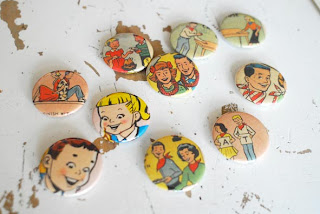 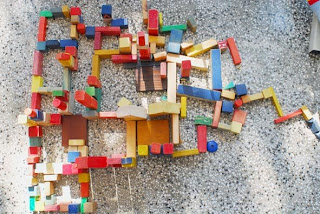 Sometimes we end up with Arthur in the shop 'helping' out. Usually it's for short bursts at a time. So this morning he helped me make some magnets, thanks to a super vintage party booklet which I have a few copies of. I will show more at a later date as I've got another 6 posts until I reach the 100 mark and am thinking a little give away will be upon us to mark that post.
So other than making magnets we made what Arthur likes to call block building....'stew pasta'. Don't ask me how or why it just is.
Nick has been busy looking after our dog Sophie. She's a kelpie/heeler cross and around 17 years old. Poor soph isn't too well at the moment and is receiving weekly jabs at the vet for arthritus and other old puppy complaints. So we are a little sad here as we're not too sure how she's going to be. I'll get organised and upload pics of Sophie and our other dog Sammie and our shop cat Dezdamona soon, as they all roam in and out of the shop. Sorry no 'from a pet free home' around here.
Posted by Arthur's Circus at Saturday, April 19, 2008 No comments: 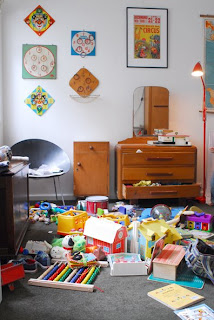 Someone (who shall remain nameless) obviously didn't want to go to sleep straight away last night.... I was greeted with this about an hour after putting him to bed. Usually we leave the light on after story time, as he likes to look at some books by himself and within half an hour the light is out and he's fast asleep. Seems that didn't happen. Toy box, buckets etc empty. At least he didn't take out all his clothes too. As soon as I saw it I knew I had to leave it in place to photograph this morning....
Posted by Arthur's Circus at Thursday, April 17, 2008 3 comments: 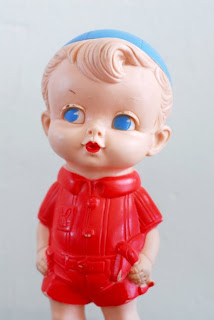 Oh boy, parting with things can be so hard. We collect, we display, we keep. Sometimes things sneak down to the shop to hang out and show off how cute they are. Sometimes they're for sale and sometimes they're not. I know as a buyer it can be very annoying when you see something you like, only to be told, sorry it's not for sale. It makes me want to punch someone in the nose. Plus we here at Arthur's Circus need to make a living and can't always just show what we have. So yesterday I said goodbye to this little boy from 1956. It was hard but I knew he was going to a good home, making new friends and I managed to take a photo of him before he left. Have fun little fella.
Posted by Arthur's Circus at Sunday, April 13, 2008 1 comment: 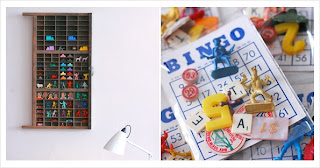 We have some old printers trays now available in our shop in North Melbourne. I was thinking of selling a few on-line but as shipping can be a tad expensive and perhaps bulky, these are probably best picked up. Although please contact us if you would like a quote. We give the trays a clean and add wire so you can hang them on a wall. So this prompted me to make a little printers tray starter kit to start you on your merry way.
Posted by Arthur's Circus at Friday, April 11, 2008 2 comments: 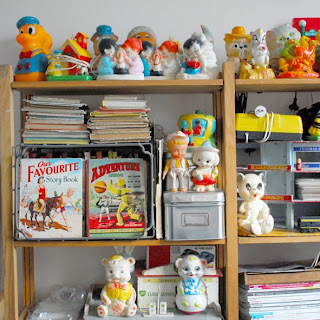 Phew what a week so far.... we have been madly cleaning and yet again re-arranging our home as yesterday Sharyn Cairns photographed our home for Cookie Magazine. Whilst this is very exciting, folk out there do not underestimate how messy we (well I) are. Last week I finally managed to sort through piles of paperwork and boxes of crap and had some sort of organisation in our office/study only to be destroyed by the last few days cleaning frenzy that saw everything dumped in there. I had a sewing table, woo hoo for 3 days. I'm so over being messy and wonder if there is any hope. I even asked my Aunt recently if I had ever been tidy and organised, even when I was little. A resounding "No". Damn. Oh well, at least in photographs my home is how I would like it to be.
Oh and I managed to do some of the styling, so there may be cameo appearances by nongs, oobee and a thelmas stuffie. Nothing like a bit of gratuitous product placement.
Posted by Arthur's Circus at Thursday, April 10, 2008 2 comments:

are pimples ruining your chances 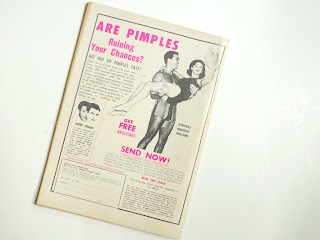 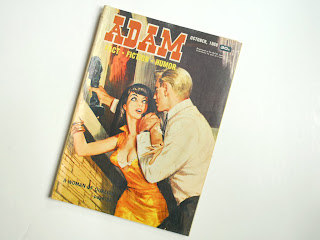 Are pimples ruining your chances?.....no but I think those shorts and hairy legs might be.
A little of what else was in grandad's shed. Ssssshhh don't tell my Nana. I am selling a few of his old "men's" magazines from the late 1960's on ebay. I like some of the artwork, illustrations and photography and especially the adverts in these mags but as I have previously blogged we don't need to keep everything that comes our way.
By the way, I wonder what ever happened to Freedom tablets for bad pimples? And did they work?
Posted by Arthur's Circus at Sunday, April 06, 2008 No comments: 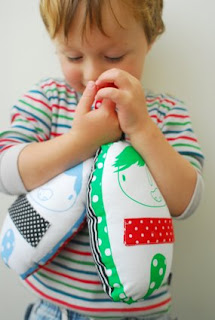 A brand spanking, hot off the screen printing press, new softie from the talented ms aunty cookie. Featuring a pocket for teeth, in exchange for "I accept notes, change and jewels."
And we here at Arthur's Circus are one of the lucky few who will be selling them. So if you can't hot foot it to our North Melbourne shop, then come on over here, where you can buy online.
Posted by Arthur's Circus at Friday, April 04, 2008 No comments: