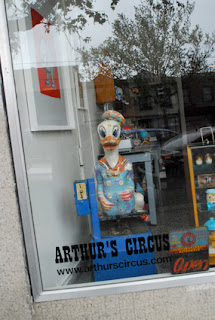 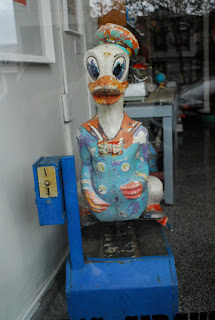 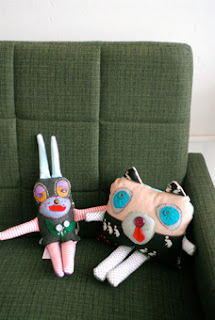 A story about Donald..... he's originally from the carousel at the Melbourne zoo circa 1950-60's. He's our shop duck. We bought him with the base (although the two were not fitted together). So we had them welded, gave him a clear varnish so he wouldn't flake no more and put him to work in the window. Plugged him in (Nick used to be an electrician) put Arthur on top and away we went. Although Donald wasn't so smooth, he was like a wild bucking bronco; he headbutted Arthur, there were tears and much "I don't like it". So the cord was cut and now he sits still. What with children and public liability. Geez.
Last pic is a sample of Thelma's stuffies which arrived today. So very ace. I'm not going to link this one. (is that mean and not allowed in blog land?) I think you need to come to the shop and look for youself and buy one. ha ha.
Posted by Arthur's Circus at Friday, September 28, 2007

Oh no, I love your blog and the shop looks very, very nice.

Ooh, congratulations on your new shop!